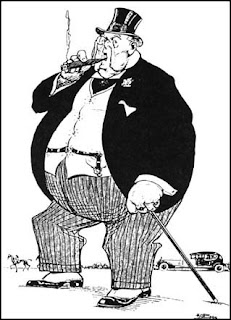 Notes from the Campaign Trail
As I continue my quest for political office, I think I finally understand the term "fat cat." The term originated in the 1920s to describe rich political donors. For me, the term "fat cat" took on a different meaning. Since starting my campaign, I may have admittedly picked up a pound or two in the polls. It's not my fault of course. Apparently, the political season runs hand in hand with state fairs, church picnics and community festivals filled with fried twinkies, grilled kielbasas and overflowing beers.  I now find that walking the city's neighborhoods to knock on doors has an added benefit.  In addition to meeting voters, it's a chance for me to get in shape. Then again, it was said that William Howard Taft weighed 335 pounds. He wound up becoming both President of the United States and Chief Justice of the Supreme Court.  Maybe it was ok to pack on a few pounds. What did it really mean to be in shape anyway? Round is a shape.

This past weekend I had attended New Britain's first ever Oktoberfest.  Held over a three day period in the city's downtown, the festival featured large mugs of imported Oktoberfest beer, grilled sausages and great music.  I had publically supported the event despite voices of criticism.  I supported the idea of festivals in New Britain.  They brought in visitors and breathed life into the city. They generated income for businesses. They encouraged repeat visitors to the city.  I was also a student of history.  George Washington had lost his first election after complaining about too many taverns in town.  I wasn't about to tell people that an Oktoberfest was a bad idea.  It turned out to be a tremendous event. It turned out much better than the Oktoberfest in the movie "European Vacation." 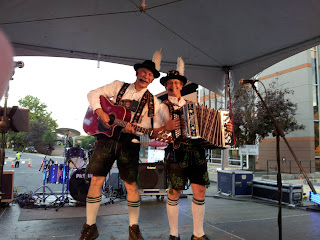 With friends and family in tow, I attended the event sporting my recently ordered "Vote Baron" political button.  I watched as more seasoned candidates made their way glad-handing through the crowd. I didn't have a free hand for hand shaking.  I had a beer in one hand and a potato pancake in the other. How was I supposed to shake hands?  "Rookie mistake" I thought.


Although the response to my campaign was overwhelmingly positive, not everyone was a fan of your favorite neighborhood lawyer. I had run into the ex-husband of a woman I represented in a divorce. "You're the bastard that represented my wife" he bellowed. "Would you like a button?" I offered.

Things only got wurst. Bratwurst that is. I encountered Frank N Stein. The behemoth grilling station filled the air with the wonderful aroma of grilling German sausages.  I immediately exchanged my festival dollars (designed to look like euros) for the delectable delight.  It would go with the imported beer I was holding.  I was stuffed. It didn't matter. I encountered some players from the local high school football team. "Buy a Hurricane Dog with special sauce and support our football team" they implored.  I was running for office.  I wasn't about to be painted as someone who didn't support Hurricanes football.  "Two please."  It didn't end there. The local Arts Alliance had a strudel cart.  A local Polish grocery store had blueberry pierogi. I still had to go to the Ukrainian festival.  How was I going to survive this day. "Is that fried dough? I sucked in my gut as I posed for a photo with Miss Polonia World.  "Cheese" yelled the photographer. "Where?" I demanded. 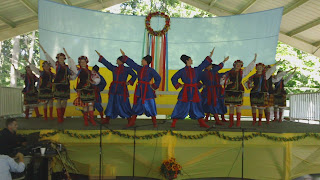 I eventually rolled myself into my car and headed to Falcon's Field for the Ukrainian festival.  Reaching the site,  I  began feasting on borscht, shish kebabs and a Kozak platter made up of perohy, holubchi and kovbasa. "You have to try Ukrainian beer" prodded a local constituent. "And my wife's babka"   My "Vote Baron" pin held on for dear life as my waist expanded.  "Sure" I answered. 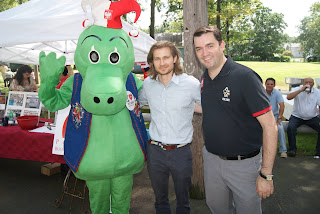 It wasn't my first day on the festival circuit.  I had also attended the Polish Dozynki Harvest festival a few weeks earlier. It's where I posed for photos with movie actor Pawel Szajda (Blue Bloods, Under the Tuscan Sun, Generation Kill) and Stanley the Little Poland Dragon. If you were running for political office in New Britain, you needed a photo with Stanley. People love Stanley. I ate my fill of kielbasa, pierogi, and gołąbki. 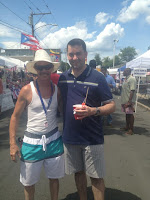 At the Puerto Rican festival, I tried pasteles which are traditionally given out during Christmas.  As I strolled around with my pina colada, I ate arroz con pollo and various carne fritas.  I showed off my years of Spanish language training. (If you need help finding the library, please let me know).  I made plans to order a Rascal scooter.  This campaign was going to be the end of me.  I didn't just show up for a photo op.  If I was going to attend your festival, I wanted the full culinary experience. 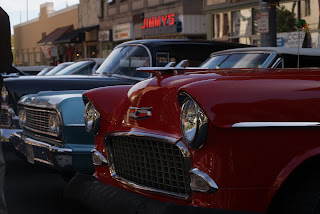 Next week the city of festivals will host the Downtown District's annual car show.  I have already added a hole in my belt to make room for hotdogs, cotton candy and anything else I may find.  Hope to see you there.

What a wonderful and funny post. I wish I had known about the Oktoberfest. I would have attended. Worth the drive from PA.

If I lived there, you would have my vote Attorney Baron. :)

Very fun accounting of the day!

Great writing style. You really know how to tell a story. Keep up the good work.

Still laughing! This post is sooo funny!
Good luck on the vote!

What to Expect When You're NOT Expecting said...

Great post! Extremely funny and well written! You have my vote for best blog I have read this week ;)

What is being in shape anyway? round is a shape.

Adrian, you really are a tremendous writer. Ever think of writing a book?

Great post! Sounds like you have to always have a hand free for shaking but just make sure that free hand is not covered in food grease. You don't want to be known as a greasy politician.

I love professional people that havent lost their sense of humor! :) Great post, made me wish I had went!!

I always feel sorry for the presidential wannabes when they hit the state fair circuit - if they skip eating anything they might look stuck up, but if they eat everything odds are they'll look ridiculous at some point, and it's that picture which will make the front pages.

Adrian, Oktoberfest was a fun event (Took the kids there myself) ! Enjoyed reading your account of life on the trail!

I am hoping for a successful outcome of your political story, I believe it will be good for you AND for New Britain!

Great writing style. Like Joe, I hope the story ends with you winning your seat.

Ha! This made me laugh aloud- great writing!