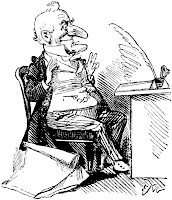 The Nutmeg Lawyer Blawg was profiled in this week's issue of the Connecticut Law Tribune. As you can imagine, it is always an honor to be interviewed by one of the leading legal publications in the nation. The Tribune is a great source of information for cutting legal news and developments in the law. It includes interviews with some of the top judges and lawyers in the state. It begged the question. Had I finally arrived? So, I finally made it to the big leagues. I was featured in the Connecticut Law Tribune. I was Lou Gehrig being put in for Wally Pipp. I was Susan Boyle singing my way to success despite being bravely frumpish. There was my picture on the front page along with notables like attorney John Brittain, renown for his work on the landmark Sheff v. Oneill case. Not bad company. I was amongst learned hands. From now on, I could be viewed as the scholarly type lawyer. I could finally get away with wearing a bowtie. I quickly opened to page five seeking my new found destiny. Surely, other firms would be calling me with offers of full figured salaries. Or perhaps I would receive a telegram begging me to chair the legal writing department of Yale or Harvard Law. Could this Tribune interview save me from my life of drunk driving grandmothers, shoplifting trust fund kids, suburban closings and desperate divorcees? Apparently, the answer was no. Destiny Awaits I took my copy of the Tribune into a local Scottish restaurant. Opening to page 5, I found my face glaring back at me in a full color photo aside an article entitled "A Lot of Funny Things Going On." Perhaps it will be an investigative piece, I thought with a glimmer of hope. Surely it would be a discussion of my insightful reflections regarding notaries and the illicit practice of law. Maybe it would focus on my opposition to the legislature's proposed sales tax on legal services? "Oh cruel fate, how shall my words be remembered for the ages in the black and white chronicles of the Tribune?" I asked incredously. "I don't know sir" came the answer behind the counter. "But your holding up the line. Do you want fries with your Happy Meal?" Let's just say a sampling of my eloquence included"jackass law students turn into jackass lawyers" and "I don't want to do homework every night." Pure poetry. I could be the next Clarence Darrow. The article referenced everything from Jamaican flag belt buckles, Playboy magazine, magicians, deli workers, William Shatner and a backhoe. I couldn't help wondering if I was the first attorney in the Tribune's illustrious history to use the word "jackass" in a quote. The word appears three times in the article. Perfect. Sometimes, I feel like I am being secretly taped for a bad reality based sitcom. (Update: apparently I'm not the only legal professional who uses the legal term "jackass" ) Kidding aside, my warmest thanks to the CT Law Tribune for their coverage of this blog. If your firm is considering doing a blog, I recommend doing so wholeheartedly. After only a month in existence, I have been surprised at the attention it has received. A Connecticut newspaper did a story on the illicit practice of law based on one of my posts and I have been contacted by bloggers and reporters from Maryland, Florida Pennsylvania, New York and Massachusetts regarding other posts. This week, Technolawyer.com will feature our Mobile Law Office article. Writing this blog has led to client referrals and some positive press coverage for our firm. Sincere thanks for your continued reading and support.
Posted 9:42 AM

I read about Nutmeg Lawyer being profiled in Connecticut Law Tribune in the AVVO blog. I can't match the clout this publication must have with the Connecticut bar and bench, but I can offer you a profile in Pittsburgh Legal Back Talk. Now don't go looking for it the minute I post this comment -- I'll need a little time to post. Moreover, I'm going to put you on my blogroll so that I can find material to steal (did I say? -- strike that) . . . so that I can find inspiration for future posts. Don't worry, I'll link.

I didn't know about the nutmeg lawyer. Now, I am going to find more about it on internet. It seems interesting.

very nice article and nice word you put on that article, have nice to see you, i'm from indonesia...

Stumbled upon, that is a crazy name for a blog. Very Catchy. I was reading your other post and found some good/funny read. Keep it up...

Playing bingo needs more than luck or skills and techniques, contrary to what most believe. Bingo, just like any game of chance, comes with rules and regulations that players should observe. Being a player comes with responsibilities and etiquette.

The moment you figured out you won, you must immediately yell BINGO, and it should be loud enough for the floor walker to hear. The pot money shall be given to the winner once their winning card is confirmed. Well, in winning or once you know you just won, the most important thing is that you shout the winning word BEFORE the time elapses. If the game proceeds and the next number is mentioned and you failed to shout "Bingo", your winning card is disqualified. Therefore, this is the rule you must know.

Bingo rules are basically the same no matter in which Online Bingo hall you play. But still it's good if you know these rules by heart. If it is your first try, then ask for handouts and inquire from pros regarding the game rules. Nonetheless, the ideal thing to do if you have questions is to ask the floor walker and not the person seated beside you. You should clarify things and doubts before the game starts because asking too many questions as the game proceeds could well distract you. This guideline also applies to those who are newcomers at casinos, those who play roulette for the first time.

Bingo halls demand an age limit of 18 years old. If you are below this age, you are prohibited to play. Some bingo houses ban alcohol inside, so players aren't supposed to take liquor nor drink it inside the venue. Smoking may also be restricted inside the venue, as there are designated smoking sections.

Take note that some Bingo houses don't allow food but some do, so it basically depends on the venue. Policies vary among different venues. For instance, some bingo halls allow reservation of cards, while others don't allow it. Some allow people to leave the venue in the middle of the game, others forbid it. But there are general policies observed in all bingo houses, such as disqualification of tampered bingo cards. There is no way you can get away with a tampered card because the walkers are adept at identifying authentic cards from tampered ones. You could be banned from a bingo establishment if proven liable of tampering a card. Hence, you should play honestly.

Interestingly, some venues offer special bingo games for kids although some halls don't allow players to have companions while playing. Suppose you bring kids with you, don't let them run around the venue and bother other gamers. They should behave well whilst you play and the game proceeds. Play quietly and don't recite the numbers you desperately want to come off because you'll be much of a disturbance if you do. Decorous playing is expectant of all players, even those who play roulette at casinos. Also, having a valid identification is important because you don't know you might win and need to present credentials.

Thank you for sharing. I found this post to be very informative. A living trust is a legal instrument that is used to ensure that your property is properly transferred to your family and other beneficiaries upon your passing. Many people confuse trusts with a living traditional last will.