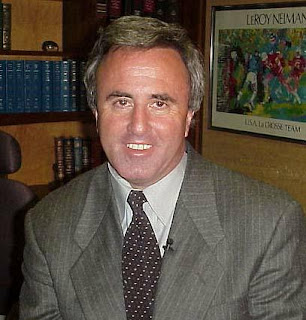 UPDATE: Stamford Superior Court Judge Douglas Mintz ruled today that Mickey Sherman will be suspended from law practice starting March 15.  That is the date Sherman is slated to report to prison.  Sherman's attorney, William Dow indicated that he will undoubtedly apply for reinstatement upon his release. During the proceedings, Judge Mintz gave some words of encouragement telling Sherman "I know you are a good lawyer.  I hope you can put this behind you."  It appears Sherman's son, Attorney Mark Sherman will take over his practice while he is incarcerated and suspended.

Our original post on the subject: The Tax Man Cometh
Connecticut Attorney Michael Sherman has been sentenced to a year and a day in federal prison for failing to pay income taxes.  According to court records, Bridgeport federal prosecutors stated he repaid $400,000 but still owes about $1.2 million in taxes, penalties and interest from 2001-2009.  Reports indicate that Sherman admitted that he could have paid the taxes but opted to paying for things like an exclusive country club membership instead.  His law partner, Joseph Richichi was sentenced to 16 months in 2007 for also failing to pay taxes.  Shermas is represented by noted Connecticut attorney William Dow III.  Sherman starts his sentence March  16th.
If the name sounds familiar, you may recall Sherman from his representation of Kennedy cousin Michael Skakel in the Martha Moxley murder trial.  Skakel is currently serving a 20 year to life sentence.  Michael Skakel's current counsel, Hartford Attorney Hope Seeley, maintains that Sherman's financial difficulties lead to a failure of properly investigating the case.
Posted 3:30 PM

I am a little confused.. did he just flat out do nothing about his taxes between 01 to 09? Or did he keep deferring them through his accountants, assuming that can be done? I just find it strange that a lawyer would be this reckless with his taxes, although I can certainly see the temptation in trying to avoid taxes.

As a fellow attorney in Massachusetts, I am embarrassed at both Mickey Sherman's willful disregard of the law & Attorney Dow's comment wherein he stated " If I had a nickel for every time someone in the U.S. failed to pay their taxes, I could put all my children through graduate rather than just undergraduate school, which is already killing me."

I have found Attorney Dow to be abrasive, arrogant, profane & unethical (he tried to charge me $1000 for simply refusing to take my case, calling it a 'nonrefundable retainer').

As the old saying goes, "Birds of a feather fly together.;) God bless Mr. Sherman at the booty house.