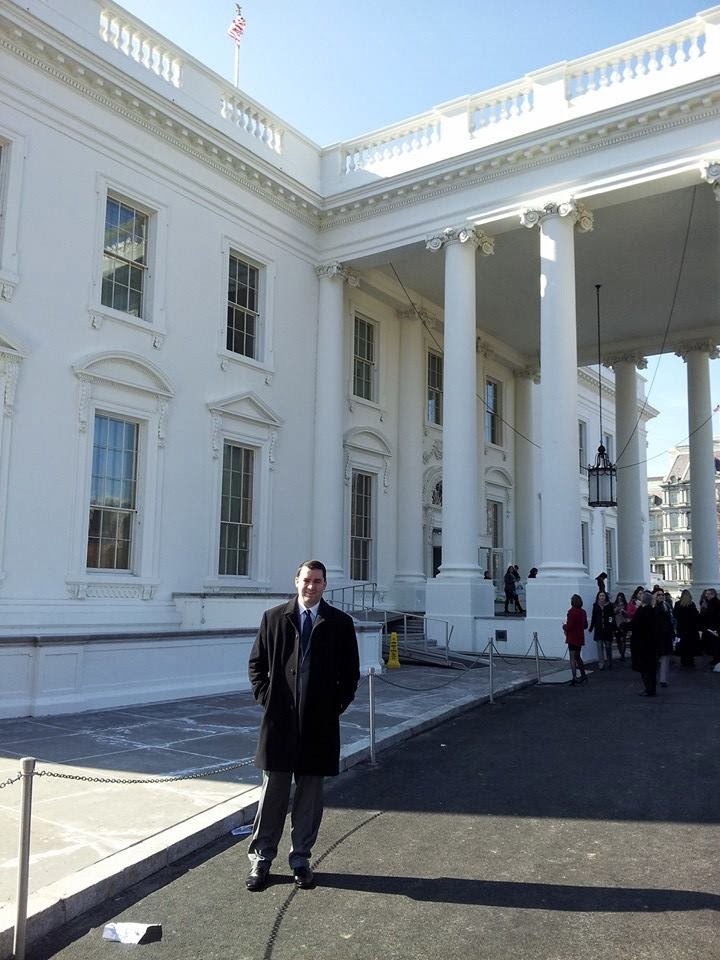 This past Friday, I was invited to take part in a day of meetings at the White House with various community leaders from across the United States.  As an American citizen, the honor was overwhelming. As a kid, I had visited the White House with my family as a tourist. Never did I imagine I would be invited there "on business." Of course, my family had forged long ties to this nation.  The Barons had come to these shores around the time of the British invasion of New York. It was about time we got invited to the White House.

Of course when I mention the British invasion, I don't mean those red coated fife aficianados who saw their tea thrown into Boston Harbor.  I mean the mop haired variety.  My parents both came to this country from Poland during the time of the Beatles invasion. Yes, it is true. I am the son of immigrants and I couldn't be prouder.

My family's story is just one small thread that makes up our national tapestry.  We are a nation of immigrants. My father did his best to take advantage of the opportunity. He came to this country with a few dollars in his pocket to establish a new life.  He wanted to raise his family here. For over forty years, he has put in long hours working at a factory manufacturing aircraft components.  Through his hard work, he has been able to provide his family with a brighter future.  He eventually bought his family a home in the suburbs and even put an American made 1969 Stingray in the driveway. Because of his hard work, I was able to pursue my own American dream.  I pursued my law degree.  I owe everything to my father and to the opportunities granted by this nation.  He even lets me borrow the Vette now and then.

I myself was born in the United States.  As a result, I was able to enjoy a steady diet of E.T., World Wrestling and GI Joe as a kid.  I was able to miss out on things like communism and martial law.  So here I was, the son of immigrants standing in the home of the President of the United States.  As my wife and I toured the White House, we gazed at portraits of the men who helped define American history. I stood under Aaron Shikler's powerful posthumous painting of President Kennedy with his arms crossed and eye's downcast. It was surreal to think I was walking in the shadows of these great Americans.

To mark the occasion of my visit, I had worn my father's tie.  I wanted him to be there with me in one way or another.  I thought of him as I watched Marine One land at the White House from a distance. Seven of our nation's presidents were the sons of immigrants.

As we walked through the Neoclassical home,  I had a chance encounter with a member of the Obama family. Sunny had just come in from her walk.  She strutted past me and stepped on my shoe.  Sunny also had an immigrant background.  She was a Portugese Water dog.

We finished up our tour and proceeded to the Eisenhower Executive Office Building which was adjacent to the West Wing. Before our meetings began,  I went in search of a rest room.  I was about to knock on a door to ask for directions when I noticed the nameplate.  "Vice President's Office".  Maybe this guy had more important things to do.  I would ask someone else.  Then again, he did share my father's love of Corvettes.

I proceeded to my meeting rom where I was joined by community leaders from across the country. I soon realized that the immigration issue was not just a Latino issue as it was often portrayed. The room was represented by a large swath of immigrant groups including the Irish,Italians and the Polish. The room made up a beautiful tapestry of what the US was all about.  The participants shared stories of their own immigrant experiences and the troubles with the current system.

As an immigration attorney, I knew this first hand.  The system was broken and ignoring the problem was not going to make it go away. As the head of a business association, I also knew very well that our nation was missing out on millions in business investment, tourism dollars and technological advances.  Something needed to change.

The President and Senate were on board with Immigration reform.  The next obstacle lies with the House of Representatives.  That is a huge problem.  During my recent visit to Congress I noticed both Coke and Pepsi machines in the Capitol's cafeteria.  These guys can't agree on anything.

With immigration reform, we have the opportunity to strengthen our nation.  It is the consensus of most economists that immgrants fuel our economy.  In my own city of New Britain, this fact is plainly evident.  Polish immigrants make up the majority of  the 100 businesses in the city's Little Poland district.  Once strife with crime, these hardworking immigrants revitilized the neighborhood. Local politicians often refer to it as New Britain's "real main street."  It is the American dream on display. Local restaurants like Staropolska have been reviewed by the NY Times and the Travel Channel. Little Poland's Belvedere Cafe has been visited by members of US Congress, foreign dignataries and world famous athletes. When a local police officer was seriously injured, they were the first to offer their facilities to raise money for the officer and his family.

In addition to these small businesses, Polish immigrants have begun bringing manufacturing back to New Britain. The city's new Polamer aerospace manufacturing plant is being built by Polish immigrants to the United States.  It stands poised to provide hundreds of jobs and will undoubtedy fuel the local economy with workers seeking out homes, restaurants and shops for goods and services. The city has several machine shops that produce parts to fuel our nation's military.  Many are owned by Polish immigrants.  The Poles are just one immigrant group of many that fuel our economy.

Welcoming immigrants is not our nation's weakness.  It is our strength. The time for immigration reform is now.  If you share my view, I encourage you to contact your own members of Congress and let them know.

You can also view this post on our update new site thenutmeglawyer.com
Posted 12:13 AM

How was your trip? You seem like a real professional, just traveling and living the good life. It's hard when you are going through divorce and you need a lawyer that you can trust.

Thank you for the information you have provided, I am really happy because this post with my knowledge increaseth, visit our website manuel

Great blog post! I don’t understand how long it will require me to obtain through all of them!

This is a great blog. I have been trying to become a lawyer for quite some time now and I didn't know what steps to take. This will help me out a bunch.

Truly awesome blog! I desire the same top-quality blog post from you in the forthcoming also. Joseph Tacopina

Nice blog.
Thank you for providing such an amazing information for us that is very useful. Keep it up.
Real estate lawyer Braintree