Nothing prolific to report today.  Just needed to share a story.  I felt it was my duty just in case some college student was considering law practice and stumbled across my blog. The following is based on a true story of the life of Attorney Adrian Baron based on the novel "Push" by Safire.
A few months ago I was approached by a young couple who needed help in a real estate transaction.  The happy pair wished to purchase a stately McMansion.  It was a dream house for my clients.  They had attempted to purchase it before but the asking price was too high.  After the economy soured, the price dropped.  They would be able to buy their dream home from the elderly owners for $300,000 below the asking price.  It was quite a deal.

The happy couple had been in my office before for a real estate closing.  Intending to purchase a similar home, they had cancelled the closing because a fortune teller advised them against the purchase.  I balked at taking another chance on them until  I was reminded of Virgil's famous words "Audaces fortuna iuvat".  Fortune favors the bold.  I should have taken another Latin phrase to heart. "Avaritia facit Bardu."  In other words,  "Greed makes you stupid." At the client's request, we had substituted the Realtor's contract with my own.  To quote "A Christmas Story, " rarely had the words flowed from my penny pencil with such feverish fluidity. I would prove that I deserved that A in first year Contracts.  The client's called me several times a day.  They met in my office to meticulously review the contract terms.  I prepared a title search.  Their loan was approved.  The stage was set. I was in the big leagues. No more duplexes and condos across the railroad tracks.  This was a McMansion. We were quickly approaching the closing date.  A home inspector was hired to inspect the home from the lowest level to the top tier.  The inspection went perfectly.  The home was solid.  It appraised well above the asking price. 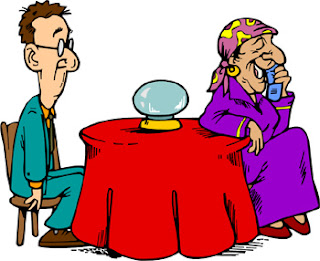 Now, if you actively practice law you probably run into a snag or two.  My practice is no different.  I would watch the fruits of my labor wilt on the vine a second time.  The couple informed me that they no longer wished to purchase the home. You have probably already guessed the reason.  They had been to a fortune teller to get a reading on the home. The fortune teller advised against the purchase.  She had gotten a bad vibe from the property.  It was the second time this couple had cancelled a closing due to the words of a fortune teller.
I felt exactly like I did when I accepted a check payment from a client who was arrested for bouncing checks.  As the old saying goes, fool me once shame on you.. Fool me twice...........well at least it's Friday.
Posted 4:43 PM

Let's see. A home, appraised well above the asking price, went back on the market. I wonder whether the fortune teller moonlights as a realtor? I foresee a nice, fat commission. Those glass balls ain't free ya know. Or perhaps the psychic had to have new business cards printed? One's with her new address?

I'm not a lawyer. So do I seem cynical enough to take the LSAT? Did 33 years as a welfare caseworker do it?