FBI Sting Nabs Over 120 Mob Members Throughout Northeast. (Plus Tips for Mob Lawyers) 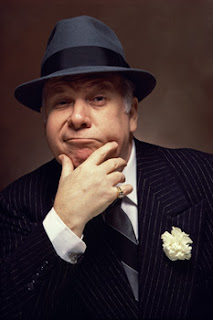 Taking a page out of Goodfellas, Attorney General Eric Holder announced today that Federal authorities had been successful in orchestrating one of the largest operations against the mafia in F.B.I. history.  With over 800 federal agents involved, arrests occurred throughout the Northeast and one arrest in Italy.  Charges ranged from murder and extortion to various RICO violations.
The 120 plus arrested alleged mafia members included union officials and cops.  The arrested men had colorful nicknames like Junior Lollipops, Tony Bagels, Meatball, Baby Fat Larry,  Jimmy Gooch, Pooch, Mush, Lumpy, Johnny Cash, Jack the Whack,  Vinny Carwash and Bobby Glasses.  They will join 93 year old mob boss John "Sonny" Franzese who was sentenced last Friday to eight years in prison for extorting NYC strip clubs and pizza joints.

Arrests included associates of the five reputed mafia families: the Gambinos, Genoveses, Bonnanos, Lucheses and Colombos. Authorities also charged accused members of the DeCavalcantes in Newark, N.J., and the Patriaca mafia family in Rhode Island.    Our special thanks to our Brooklyn Nutmeg Lawyer readers who report that three judges in three separate court rooms were needed to enter pleas and set bail.
Undoubtedly these arrests will keep a handful of attorneys busy throughout the Northeast. As such, the Nutmeg Lawyer offers the following tips:
Top Ten Tips for Lawyers Who Defend Mafia Members
(Our earlier post on the subject:)

Like the mafia, we have this thing of ours. Well, more like this thing of ours that speaks for itself. The more mob movies I watch, the more I realize our two worlds are not so different. They have big earners, we have rainmakers. We both have associates in our ranks. A Cappo di Tutti is like a senior partner. We both take out contracts. In negotiations, we often make offers that others cannot refuse. As attorneys, we can learn a lot from the Sopranos and Corleones. So fuhget about it! Here are some tips for your favorite consigliore.
Be a Dapper Don
In the movie Donnie Brasco, Al Pacino scolds Johnny Depp for wearing jeans. He tells him that to be successful, you got to have the right look. As the local capo arrives, we see the truth in his statement. The movie audience immediately knows which gangster is the boss. We can tell by his powerful appearance. Unlike his tracksuit clad underlings, he is dressed in a tailored suit and looks like an executive. It’s a good tip. Be a dapper don. First impressions only happen once (unless your personal injury client suffered some traumatic brain injury). If you wear jeans or a velvet track suit, people will assume you are an underling. Always wear a nice suit for client meetings, court appearances and settlement discussions. Even if your firm has a casual Friday, you should always extol a professional appearance. But unlike the dapper don, keep the diamond pinkie ring at home.

Think of Court Like the Copa
In the film Goodfellas, Ray Liotta always entered his favorite nightclub through a special entrance. He didn’t wait in line.. Many attorneys get special VIP access to the courts. We usually have a special entrance and are not required to wait in line. Treat court like it’s the Copa Cabana. When you are in the court house, don’t be afraid to work the room. Be nice to the marshals, clerks and other support personnel. Call people by name. Say hello to Bob the Court Marshal, Nancy the court reporter, Jimmy the Ox, Frankie Two Times, Johnny Bats…..whoever. But don’t start handing out tips. That’ll get you in hot water.

Think of Your Bar Association as the Bada Bing Club
Why the Bada Bing? I needed a way to shamelessly post a picture of me with Little Stevie. On the Sopranos, many of the mobsters gathered at the Bada Bing. It was a place to network and be seen. It was the spot to get info on who was getting whacked and what big jobs were out there. Bar Association events can serve the same purpose. They are great opportunities to meet local attorneys, get referrals and to learn practice tips like how to whack an adversary.

Make sure you hire good underlings
The boss is only as good as his foot soldiers. On the Sopranos, Tony brought Furio (Pictured left with yours truly. We just loaded a body into a Lincoln Continental) all the way from Sicily because he was a good button man. Success in law practice can be very dependent on a good support staff. When you are in court, how are they holding down the fort? For those attorneys who employ paralegals or legal assistants, you already know that a good support staff can make or break your law practice. With increased caseloads, today's paralegal often takes on an increasing amount of substantive work responsibilities. They are often on the front lines of dealing with the public. Good paralegals can be hard to find. They can be the backbone of your practice. Not surprisingly, it’s best to keep them happy. Your staff reflects on you. They can be your best marketing tool. You don’t want them leaving to join another family. 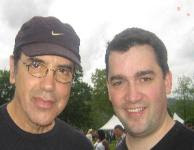 Remember it’s business not personal
To be a successful mobster, you have to remember it’s business, not personal. If the dirty rat doesn’t pay, sometimes you gotta break their legs. So what if it’s your grandma. Some attorneys take every case personally. It’s not your fault the client was arrested for drunk driving. He made the decision to get behind the wheel. Don’t take it personally if he has to do some time. If you have a difficult divorce client, try to remember she may simply be transferring her anger at her husband on you. You just happen to be the closest target. Don’t take it too personally. (Chaz Palimenteri -A Bronx Tale- with the author. I assume he is a big fan of this blog.) 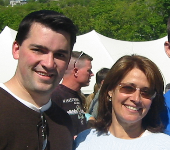 The Family Comes First
In the Godfather, Michael admonishes Fraido for going against the family. Keep office problems in the office. Leave the gun and take the cannolis. In other words, don’t take your problems home with you. Your “cannolis” are the good things in life. The wife and kids, your hobbies, etc. Your legal practice can be regulated to your comare or mafia mistress. It shouldn’t be your wife. You don't want to have to go to a shrink like Tony Soprano. (The author with Lorraine Bracco)

What a great way to share some important tips. Love the blog. A new avid reader. Curtains don't wear shoes is a great tip. LOL

Great photos. How did you meet all of these celebrities?

When you write a blog you tend to move in certain circles. I'm kind of a big deal. I have lots of groupies.